The research projects are structured around two main environmental themes: i) the restoration of disturbed soils susceptible to erosion and invasive species and ii) the rehabilitation of contaminated soil or water. Both themes will be investigated from three research axes: ecology, plant ecophysiology, and molecular and myccorhizae relationships with plants in the rhizosphere. 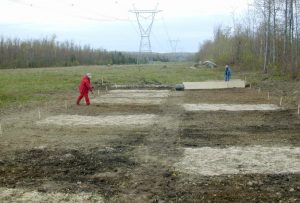 The first axis investigates ecological aspects of phytotechnology. Many studies have confirmed the importance of biodiversity in maintaining ecological services and ecosystem functions. The benefits of species diversity are rarely exploited in phytotechnological applications, due to a lack of understanding of the interspecific synergy influencing the ecological services plants are able to provide. In site restoration, it has been demonstrated that a more diverse plant community is more able to resist exotic plant invasion, but applying this concept to a specific situation requires a good understanding of species interaction mechanisms.

Project 1.1 – Development of plant mixtures to restore disturbed sites and prevent establishment of undesirable plants in powerline rights-of-way
To revegetate bare ground after the establishment of a new powerline or the construction of a transformer substation, commercially available seed mixtures are often sown to restore a herbaceous cover rapidly, prevent erosion and attenuate visual impact, without considering how this cover may help prevent or inhibit establishment of undesired plants (trees, invasive species). Plant covers vary widely in biotic resistance (i.e. susceptibility to invasion). A phytotechnological approach, based on the development of a stable, competitive herbaceous cover that protects against erosion but also limit tree or invasive exotic species establishment, may represent a viable approach in an integrated vegetation management program. Although available evidence suggests that this approach has great potential, there is still much to learn about the dynamics of rights-of-way vegetation and the most efficient way to introduce and maintain low-growing plant communities. Unresolved issues include the ecological basis for species selection (species traits, commercial crops or wild species, invasiveness, etc.), the change in biological resistance over time, and the need to scale up from experimental design to broad-scale applications. The objective of this project is to develop seed mixtures applicable to a wide range of ecological conditions and durably resistant to invasion by undesirable species (exotic invasive species and trees).

Project 1.2 – Development of a shrub cover to restore disturbed sites and prevent establishment of invasive species
While herbaceous cover alone may show high biotic resistance against most undesirable species, there are situations where this strategy is inadequate (such as under high seed pressure from a nearby invasive plant population, or on sites where no undesirable species can be allowed to establish). A tall dense shrub cover may be more efficient in preventing some of the most aggressive invasive plants, like phragmites, and still be short enough to be compatible with the management of a powerline right-of-way. However, site restoration using shrub covers usually involves plant production, soil preparation and planting, and is thus far more expensive than simply seeding a mixture of herbaceous plant species. Over the last decade, IRBV has developed extensive expertise for quickly establishing a shrub cover on harsh disturbed sites, notably with various willow cultivars. By using willow microcuttings, it is be possible to rapidly establish a shrub cover. The objective of the project is to investigate biotic resistance of different willow cultivar mixtures.

Project 1.3 – Functional complementarity in plant mixtures to improve phytoremediation of soils with mixed contamination
The benefits of complementarity in environmental conditions or in resource exploitation brought by species mixtures may have a positive effect on phytoremediation efficiency. There is some empirical evidence that increasing plant diversity may increase phytoremediation success, but studies remain extremely limited. The benefit may be manifest particularly on sites showing mixed contamination, such as in soil contaminated with wood utility pole preservatives. However, competition processes may, on the contrary, affect the ability of certain plant species to remediate pollutants effectively, resulting in decreased efficiency in the mixed culture. Enriching our understanding of the complex interactions between plant species in mixtures must thus be an important research goal in phytoremediation of soils with mixed contamination. The objective of this project is to determine experimentally how plant functional groups influence the decontamination process on sites with multiples contaminants. 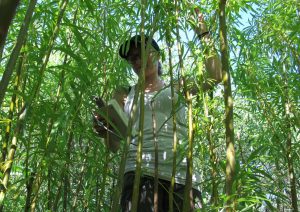 Sites used for phytoremediation purposes are often characterised by stressful conditions for plant growth and survival: nutrient-poor soils, presence of contaminants and high soil compaction. Plants used in phytotechnology must be resistant to these harsh conditions and show sufficiently high metabolic activity to efficiently stabilize soil and limit erosion, act in phytoextraction or maintain and stimulate soil microorganisms. Thus, selection of the plant species optimal for specific site conditions and phytotechnological objectives requires an understanding of plant characteristics and their ability to perform effectively under these conditions.

Project 2.1 – Determining optimal native plant species for phytoremediation of soils contaminated with pentachlorophenol and chromated copper arsenate
Utility pole storage sites may contain soils contaminated with persistent organic pollutants (POPs) as well as trace elements originating from leaching of chemical preservatives used to preserve wood poles, such as PCP (pentachlorophenol) and/or CCA (chromated copper arsenate). Until now, very few species have been tested on sites with mixed contamination by trace elements and POPs. Moreover, most species used in phytotechnology are not native to eastern North America. With increasing concerns regarding invasive plants, there is a growing demand from private and public administrations for native plant covers that bring ecological benefits in addition to soil decontamination, such as provision of habitat for biodiversity. The objective of the project is to assess stress tolerance of several native plant species (including willows, poplars and grasses) to PCP and CCA.

Project 2.2 – Zero-discharge treatment willow beds for eliminating contaminated leachates from old utility pole storage sites
In Hydro-Québec storage yards, new utility poles waiting to be installed and old poles destined to be properly disposed of lie on pole racks exposed to year-round weather conditions. The contaminated leachates, collected in a basin under the pole rack, must be treated before being discharged in the environment. Constructed wetlands represent a low cost, energy-efficient approach to treatment of contaminated water. Using willow tree species for constructed wetlands might be an interesting avenue due to their high evapotranspiration rates. However, many parameters need to be determined before applying constructed wetlands more widely. The objective of this project is to model evapotranspiration rates of willow in the context of southern Quebec’s climate and with an effluent from wetlands treating pole yard leachate. 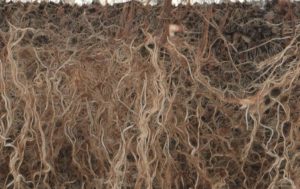 Soil microbiological and biochemical processes play an important role in phytotechnological applications. For example, soil microorganisms are largely responsible for the degradation of organic contaminants. Plants stimulate microbial processes by producing and releasing secondary metabolites such as root exudates. Root exploration in soil is also determinant in regulating nutrient acquisition as well as diverse rhizosphere processes such as acidification and enzymatic and microorganism interactions. These processes strongly influence not only plant establishment in a stressful environment, but also the plant’s capacity to absorb (phytoextraction) or degrade (phytodegradation) soil contaminants.

Project 3.1 – Root exudates and phytoremediation activity
Root exudates may be ligands for trace elements and can also impact soil organic compounds to be treated, facilitating their degradation by microorganisms. Root exudates can also influence rhizosphere bacterial community structure, which influences soil decontamination rates. Poplar and willow in particular are known to produce large quantities of secondary metabolites. However, the production of secondary metabolites is highly influenced by environmental conditions. The objective of the project is to understand how the production of root exudates is related to contaminants by comparing root exudates in contaminated and non contaminated soils.